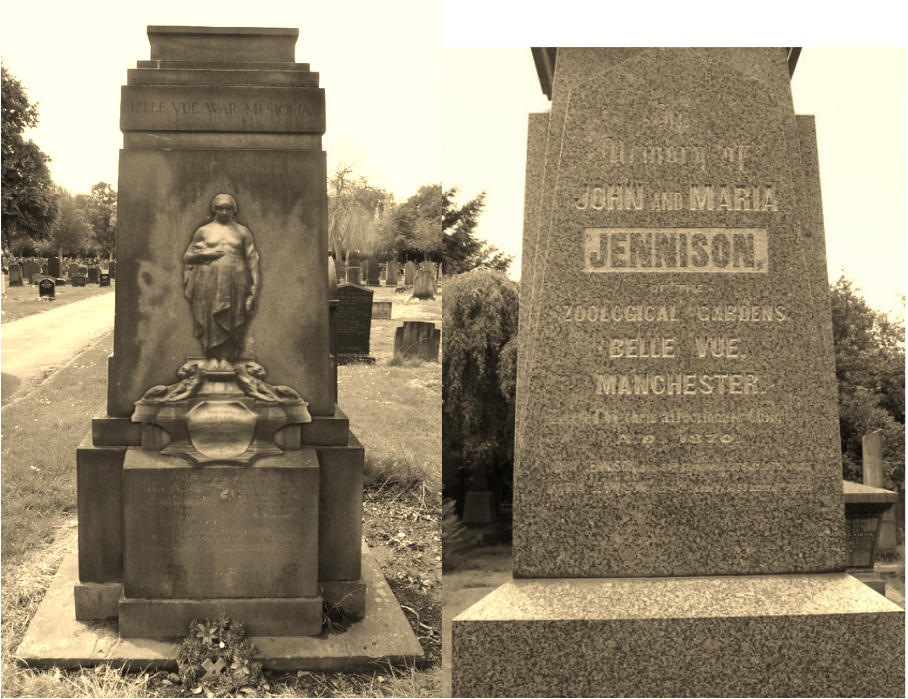 On the left above: Belle Vue War Memorial Gorton. On the right above: Jennison Family Memorial St Mary's Parish Church, High St, Cheadle
November 7th 1926
About two hundred people attended the Gorton cemetery yesterday afternoon and took part in the ceremony of unveiling of a memorial erected to the workers at the Belle Vue Zoological gardens who fell in the war. It was a simple choral service conducted by the Rev. W. Scott Adams, honorary chaplain to His Majesty's Forces, at which the choir of St. Philips church, Gorton and the Belle Vue band assisted.
Among those attending were Captain H.H.J. Holness and Captain C.F. Webb of the Manchester Regiment, members of the Jennison family, contingents of the St. John's Ambulance Brigade and the Sea-wolves of Birkenhead, the last-mentioned in honour of Petty Officer Matthew James Walton DSM, who fought in the Falklands in 1914 and died early this year.
The memorial an allegorical composition executed by Mr. F.V. Blunstone, with scrolls on which names of the fallen are inscribed, was unveiled by Mr. Angelo Jennison and dedicated by Rev. W. Scott Adams. A minute's silence was then observed, at the end of which the buglers of the 3rd company, Manchester Battalion, B.L.B., sounded the last post.
At the close of the service relatives of the fallen and employees of the Belle Vue company filed past the memorial and covered it in wreaths. Captain Holness laid a wreath on behalf of the Manchester Regiment.
In the course of a short address Mr. George Jennison said the men whom they commemorated died bravely. In peace they were quiet and kindly friends; at the call of duty they bore themselves as men. The occasion was not one for excessive sorrow but rather for public pride in noble achievement and response to duty. It was for those who survived to see that nothing they did should disgrace the memory of these men.
The photograph of the memorial is show with the now missing bronze sculpture.
The inscription on the sculpture reads "To The Memory Of Our Fellow Workers Who Gave Their Lives In the Great War 1914 - 1918".
It is rumoured that funds from the Heritage lottery fund for the first world war will be made available for the restoration of the memorial.
The Belle Vue memorial in Gorton Cemetery was commissioned and paid for by the Jennison family proprietors of the Belle Vue zoological gardens on Hyde road, Gorton, Manchester. The memorial was to commemorate workers who had either died during the war or from the effects of the war. The memorial list two of the Jennison's own family who made the ultimate sacrifice for King, country & family. Other employees worked at Belle Vue such as artists, garden staff, bar staff & clerical staff.

WILLIAM HARROLD WHEATCROFT DIED 10TH JULY 1919.
Below is a cemetery plan marking where the Belle Vue memorial is located and a plan of the zoological gardens from the 1930's. 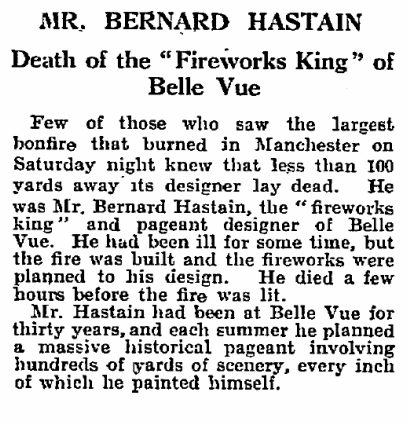 Mr. Bernard Alexander Hastin had been employed as a scenic artist at Belle Vue Zoological Gardens since around 1904.  He was born 1876 in Clapham, Lambeth, London. Son of  Louise Bernard Albert Hastain account's clerk. Mr. Hastin's worked in his early days in Drury Lane and at Covent Garden theatres. He was articled to a Mr. Bruce Smith a famous artist of his day.
Mr. Hastin's was the only artist to use a paint brush up to seven foot long and tons of paint on each of the huge canvas, some covering over 400,000 square feet. His palettes were four foot dishes and the smallest detailing brush was over an inch and a quarter at the tips.
A gang of men would have to stretch the huge canvases  and lay them out in the Kings hall ready for Mr. Hastin's to start painting them.
The biggest scenes he ever painted were started in March 1929 and to be made ready within six months. It was to represent the battle of Vimy Ridge, France in April 1917.
©2011, Manchester & Salford family history forum™ All Rights Reserved.                           13-18. 13-9-7-11-25.